LOOKING BACK AT 10 YEARS OF L'INITIATIVE 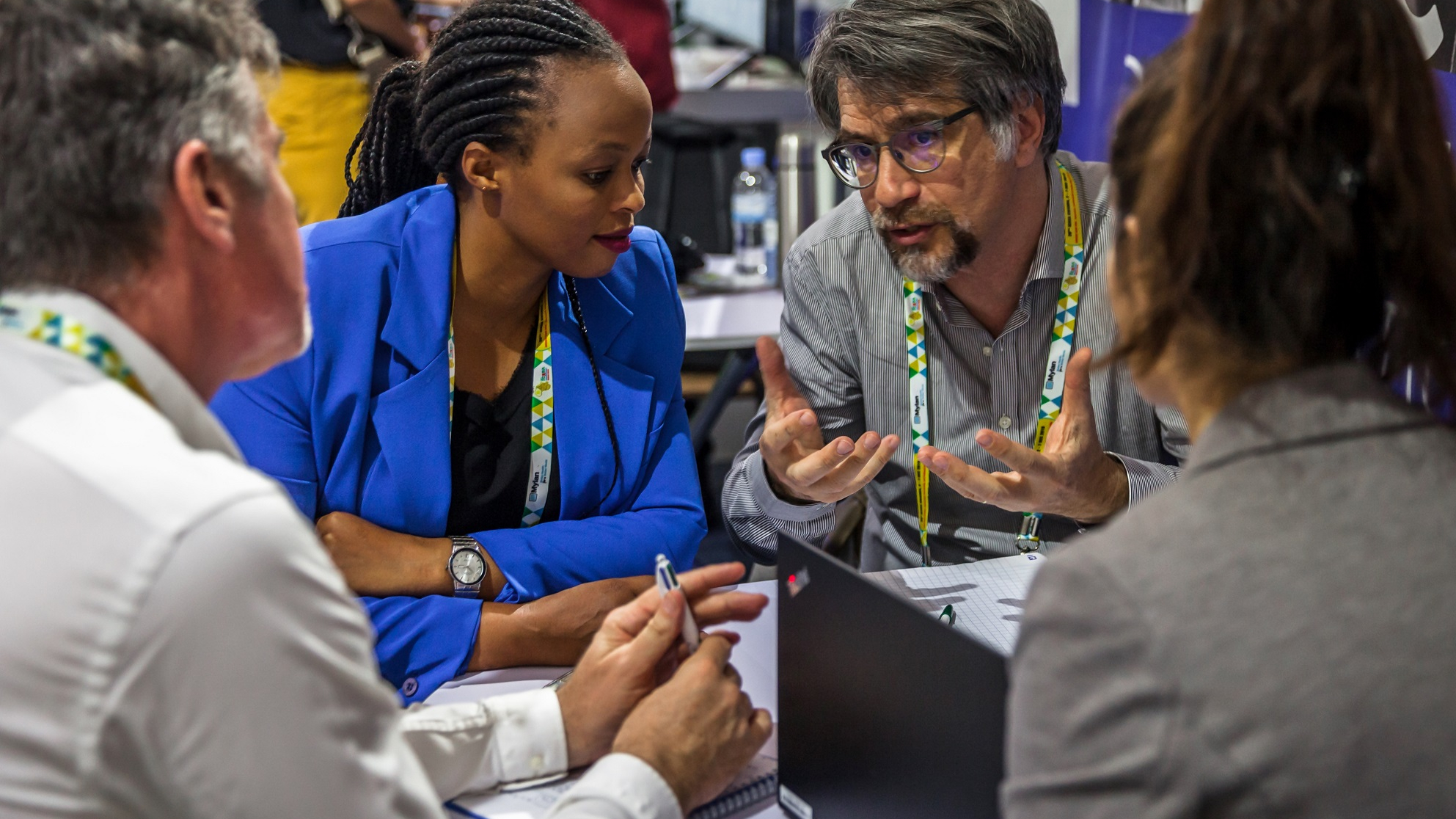 Following 16 years in West Africa, as head of mission for the French Red Cross and then for Solthis (Niger, Mali, Chad and Guinea), Stéphanie Tchiombiano worked as Head of L'Initiative for three years between 2012 and 2015. She is now associate lecturer in the political science department of the University of Paris 1 Panthéon-Sorbonne, where she is co-director of the Masters in Development and Humanitarian Aid, and coordinator of the "Global Health 2030” thinktank .>

When we talk about L'Initiative, we often say that it enables us to more easily “articulate multilateral and bilateral approaches”, but what exactly do we mean by that? L'Initiative's tenth anniversary is a great opportunity to reflect on how the program has developed and to collectively ask ourselves about the motivations of this famous dichotomy between the bilateral (direct relationship "from country to country") and the multilateral (where relationships are framed collectively, at the international level).

What is clear straight away when we look back at L'Initiative since its creation in November 2011, is the gradual increase in the financial allocation (the gradual shift from 5% to 9% of France's contribution to the Global Fund) and the increase in operations (with more than 10,000 days of expertise and around 20 new projects financed in 2020). But as the former Head of L’Initiative, what is even more significant is how the team has grown (I can't help thinking back to the small office where L'Initiative started out). In addition to managing a technical assistance mechanism, it seems to me that what characterizes L'Initiative today is its ability to recruit people with diverse profiles, to generate internal expertise, and to train new generations on international health issues. In a way, it has created a pool of talent for the global health of tomorrow.

L'Initiative could have simply stuck with effectively mobilizing experts to support access to and the effectiveness of Global Fund financing. Yet, it went much further than this, by getting involved in strengthening the network of experts and by training consultants. In this way, L'Initiative has created opportunities for experts to meet, and has encouraged more women to be part of this network. L'Initiative actively participated in the emergence of local expertise, for example by promoting the systematic use of pairs of experts (combining a “local” expert and an “international” expert).

L'Initiative could have simply stuck with launching calls for projects on AIDS, tuberculosis and malaria, but it went much further. L'Initiative has placed importance on research projects - and in this respect, it is well "ahead" of the Global Fund - while creating synergies between countries and between projects. Rather than systematically focusing its funding on the most experienced project leads, as the majority of donors do, L'Initiative has built the capacity of particular project leads that it felt needed strengthening.

L'Initiative could have simply measured the effectiveness of its work, but it went much further, by developing cross-cutting mechanisms between project leads, by regularly disseminating analysis undertaken at thematic conferences or through creating spaces and opportunities for shared reflection. I am thinking, for example, about the focus on observatories to improve access to care or to sexual and reproductive health.

Of course, there is still a long way to go, and initiatives have not always been entirely a success, but this three-pronged way of working (stimulating, connecting, supporting) is now deeply rooted at the heart of the work. We could criticize this development and say that it does not conform to L'Initiative's initial “mantra” (guidance upon request), but we could also celebrate it. In fact, L'Initiative does much more than just respond to technical requests. Today, L'Initiative has a voice; it stands for particular values and makes political choices (in the dignified sense of the term). 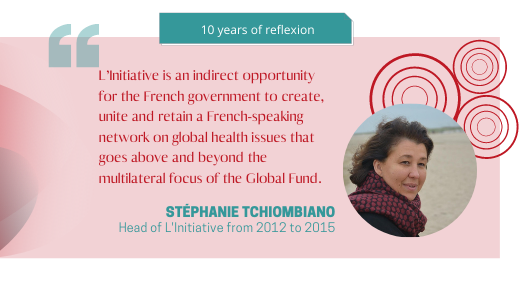 It feels as though, by withholding part of its financial contribution to the Global Fund to fund L'Initiative, France wanted to reaffirm its place as a country on the global health landscape. L'Initiative can be seen as a way of France strengthening its influence at the multilateral level, in different ways.

Firstly, it strengthens the visibility of France's engagement in the Global Fund. Each expert assignment in the field is also an opportunity to highlight the importance of France's investment, into the national landscape, CCMs, and stakeholders in the field.

L'Initiative is also focusing its efforts on priority countries for French ODA. It is therefore involved in a form of rebalancing the Global Fund's strategic priorities by strengthening the capacity of French-speaking stakeholders, by focusing attention on the “countries that matter” for France, even if they are not necessarily the countries most affected by the three pandemics.

Finally, L'Initiative promotes particular French diplomacy messaging, for example by asking all experts to watch a webinar on gender before going to the field, or by focusing its calls for project on strengthening health systems or on marginalized populations. These actions taken by L'Initiative are a way of sending a signal to the international community, of promoting particular priority French messaging on the international scene and of operationalizing them. From bilateral to multilateral.

Titre du bloc
… BUT IT IS ALSO A WAY OF REINTRODUCING THE MULTILATERAL INTO THE BILATERAL.
Contenu du bloc

This is a less common viewpoint, but L'Initiative can also be seen to be participating in what might be called a form of "multilateralization" of bilateral health aid.

Indeed, L'Initiative is a great tool to help the French government to understand the world and health issues. By having direct contact with experts and with the reality on the ground, L'Initiative is involved in the “feedback of information”. Although it is clear that L'Initiative contributes in this way to defining France's positioning within the Global Fund, it is also a source of valuable information and inspiration for French public aid in the field of health more generally, which goes beyond the Global Fund, including in relation to France's bilateral work.

L'Initiative also creates a link between the French government and a large proportion of the French or French-speaking stakeholders involved in global health, by financing their projects, by engaging their experts, and by creating bridges between them. It is an indirect opportunity for the French government to create, unite and retain a French-speaking network on global health issues that goes above and beyond the multilateral focus of the Global Fund.

Lastly and above all, a distinct characteristic of L'Initiative, which makes it profoundly different from other technical assistance mechanisms or other funding providers, is that its Steering Committee is open to non-public service stakeholders. By choosing to include representatives from the French Red Cross and French research scene, and two civil society representatives, the Steering Committee itself gives L'Initiative a multilateral angle. It is no longer just a mechanism led by the French government, but a multi-stakeholder initiative, in line with the principles of the Global Fund, which enhances the French response with the richness and legitimacy of multilateral initiatives. From the multilateral to the bilateral.

These ten years of L'Initiative's work are perfectly in line with the global reform of health aid, calling for a shift from a strictly “health” approach, centered on diseases, towards a more global approach, that is more “systemic”, embodied by the 2030 agenda, and involving all stakeholders

Today, L'Initiative embodies this renewed approach, going beyond the cooperation approach in the “classic” sense of the term (government to government), while remaining, as we have seen and we must recognize this, a tool of influence for France..